"Balls" (or FireBalls) is held once a year at Black Rock, Nevada. This launch features experimental rocketry (non-commercial motors) and large rockets. The main attraction for me at Balls 009 (September, 1999) was launching the Big Kahuna, especially after our failure to launch it the previous year at Balls 008.

Early on Saturday morning, we arrived to set up camp. You can see the rail for the new launcher on top of the van I needed to rent to transport it! 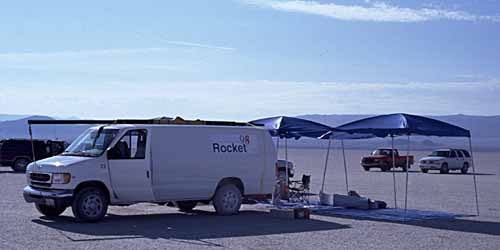 We picked a spot near the right end of the flight line. The picture below shows the majority of the flight line from our camp. This launch was smaller than last years and less rockets flew. However, I was only concerned with a good flight of the Big Kahuna, so that was fine with me. 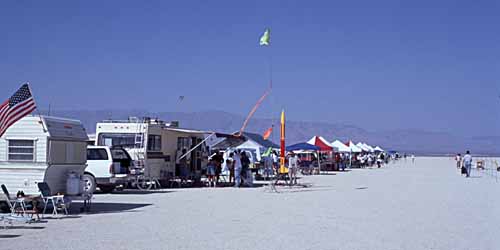 Once the camp was set up and my coworkers started arriving, we went out to set up the Big Kahuna at the launch site. Back in the Black Rock desert for the second time, the Big Kahuna still attracts interested looks. 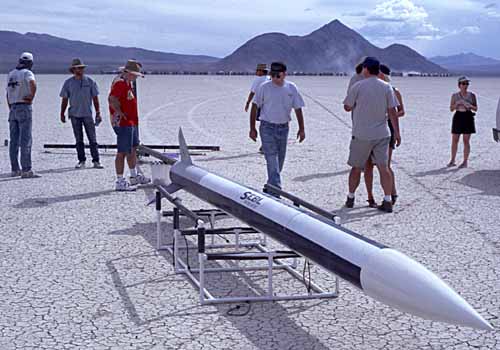 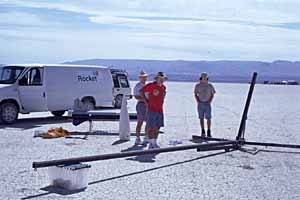 You can see the large stand assembled and ready for the Big Kahuna to be loaded onto it. The new stand easily handled this huge rocket thanks to a simple and sturdy design by Jim Sekol.

The mast and rails are square tubular steel and the center section was custom made by Jim. The rocket rides on buttons which slide in a piece of stainless steel Unistrut. The mast is 20 feet long and provides 19 feet of usable rail for guiding rockets. 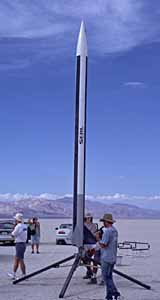 You can see that this stand was easily large and sturdy enough to handle the huge Big Kahuna. Were were even able to get up on the stand ourselves to arm the electronics!

Three rail buttons on the rocket, turned from Delrin plastic by Jim Sekol, guided the rocket up the Unistrut rail. This rocket is way too large to launch on a rod, even a large one.

The stand breaks down into six main parts: the four legs, the mast and the center section. The legs and center section easily fit in the back of a large vehicle, but the mast is a problem. We managed to strap it to the top of the rental van to transport it out and back, but this thing was a beast to manage.

A year more experience, and particularly making more contacts with fellow rocketeers, allowed this launch to be much easier and more successful.

Once the rocket was raised, the Siebel folks and some friends from ROC who helped us set up posed for the pre-flight shot. 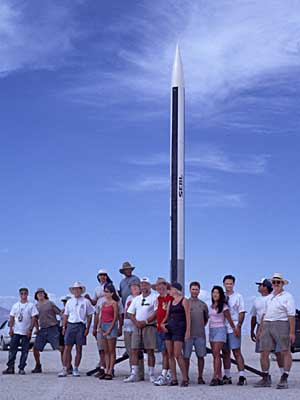 Once the rocket was up all pictures were taken and the electronics were armed, it was back to 750 feet for the actual launch. The blast was thunderous and the rocket leapt right off the pad, making a perfect flight. 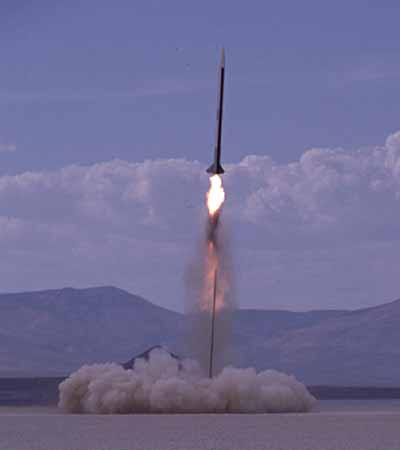 We had angled the rocket well away from the flight line so that if it shredded, the pieces would fall well down-range. However, the rocket made a perfect, straight flight to 6329 feet. 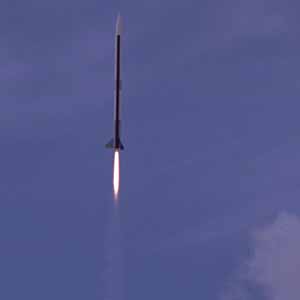 700 feet away was far enough for caution, but close enough to get a good experience of the mighty O3500 motor. The rocket was also so large that a 200mm zoom lens makes it look like we're right next to it.

The boost was very nice, although the motor didn't burn as cleanly as it might have (perhaps because it sat for a year before being used). We saw some unevenness in the boost and there were bits of propellant on the ground at the launch site. 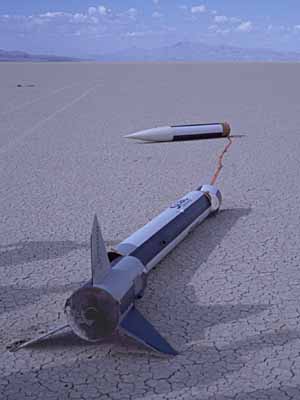 The rocket separated right at apogee, but the two sections got tangled. Three 'chutes were used: two for the booster (12 feet long) and one for the nose cone/payload section (7½ feet long).

The rocket came down safely about 500 feet down-range, but the landing broke the unreinforced PML phenolic in two places: right above the fin can, and near the forward end of the booster. The nose cone/payload section was unharmed.

Given the large size of this rocket and the lack of reinforcing of the tubing, I was surprised that it performed so well in flight and survived the rough landing as well as it did. Yes, I would do a few things differently if I was building this rocket again!

The Big Kahuna has been retired after it's spectacular flight. Thanks to everyone who helped me with this beast and to all my coworkers who made the trek to Black Rock (twice!) to watch the launch.

The Black Rock desert is the largest flat piece of land on earth and has some of the most fantastic starkly beautiful vistas I've seen. The pictures below were taken in the late afternoon Saturday as we were heading back to Gerlach--happy about the successful flight and relieved that it was all over. 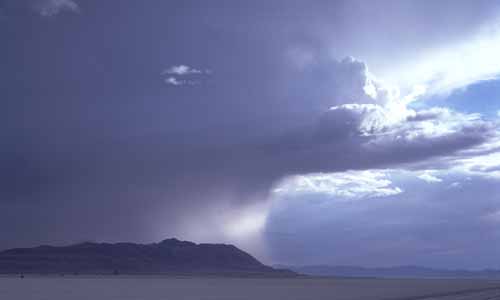 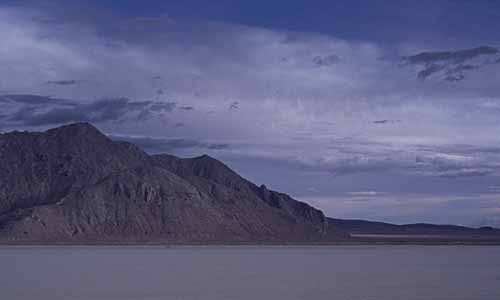