"Balls" (or FireBalls) is held once a year at Black Rock, Nevada. This launch features experimental rocketry (non-commercial motors) and large rockets. The main attraction for me at Balls 008 (August, 1998) was launching the Big Kahuna. This rocket was a monster to manage all the way through the project, and launching it was no exception. It didn't fit in my suburban because the fins added too much size at the top, so I had a courier drive it up to Black Rock while I took the rest of the rockets and supplies in the suburban. Many of my coworkers came, most of them in a limo; They know how to travel in comfort!

I had a large camp set up: three dining canopies in an "L" shape with tarps underneath. By the time the last of the Siebel crew arrived, the rockets were out and I had started to get ready to go. You can see just how prepared we were (photo Domingo Mihovilovic): 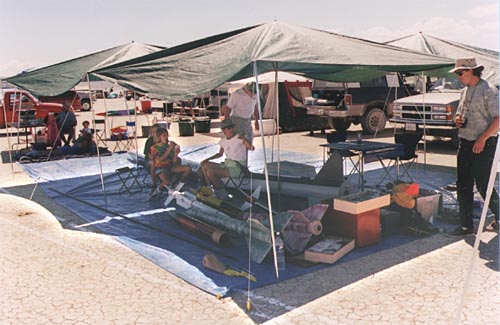 We spent most of the first day (Saturday) setting up camp and waiting for Mike Gillette to show up with the three Rocket Dyne Systems motors I'd ordered. He got stuck in the mud and wasn't able to get to the range until 3:00, leaving too little time to build the motors and fly before the waiver closed at 4:00. Once Mike built the O3500 motor, it was a truly impressive sight (about 6 feet long). It stretches way out on each side of two folding chairs (photo Andy Mazur):

The next morning, we went out to fly the Big Kahuna. I hadn't built a hatch to access the altimeter from outside, so I just hooked everything up and turned it on and we assembled the rocket. While trying to get the rocket onto the Quad-Pod the first time, the altimeter fired prematurely and the payload section and nose flew past me almost 20 feet. A healthy ejection charge (photos Andy Mazur)! 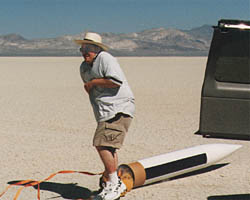 I went back and borrowed an Olsen wiring harness so that I could turn the unit on from the outside by twisting the wires together and then pushing them back inside. This was less satisfying than being able to see the display, but at least we could turn the altimeter after the rocket was upright.

There were no launchers large enough (1" rod) supplied, but I brought my Quad-Pod as a backup and we had to use it. 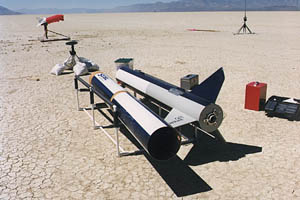 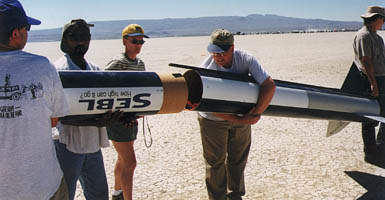 We loaded the motor and assembled the two main sections. Next we threaded the base section onto the launch rod and then attached the recovery and payload sections. Then we tried to set the rocket upright. One of my motor retainers caught on the plate of the Quad-Pod and when we tried to turn it the bottom launch lug was torn off the rocket. Trying to manipulate a 110+ pound rocket is no easy matter and even though the launch lugs were fiberglassed on, the P.M.L. tubing wall separated. 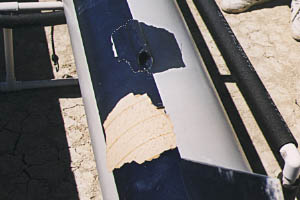 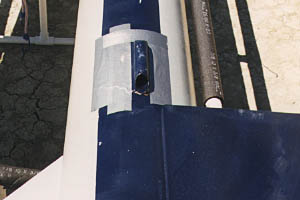 I had my West System repair kit with me so we slathered some epoxy onto the broken area, added some duct tape to hold it together and let it to cure in the hot desert sun. Not a beautiful repair, but it did hold.

In the afternoon, I decided that the epoxy had cured fully (more-or-less) and we went back out to try again. We put the rocket together for the third time and after much discussion and struggling, got the rocket upright on the Quad-Pod. Unfortunately, while doing so we managed to pull out the ignitor from the motor! 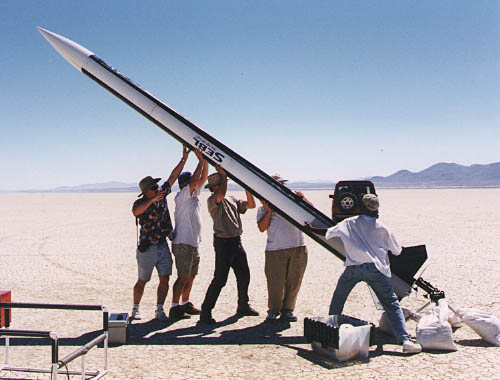 We had to lower the rocket yet again and try to push the ignitor back inside the motor. This is no easy task with a 6 foot tapered grain motor. I went back to the line and managed to borrow a rod from Paul Robinson who helped me a lot that weekend. Thanks Paul and Kosdon East!

We put the rocket together for the fourth time and after much discussion and struggling, finally got it onto the Quad-Pod and upright. By this time, though, the wind had come up and the Big Kahuna was very precarious balanced on the Quad-Pod with the rod.

When a gust of wind would come up, we would have to steady the rocket to keep it from tipping the Quad-Pod, even with the sand bags. Even though the Quad-Pod claims to hold 200+ pound rockets, it is not stable with such a heavy and long rocket. We decided that flying the rocket was too dangerous and sadly loaded it back into the truck for the ride home. So we packed everything up (photo Andy Mazur): 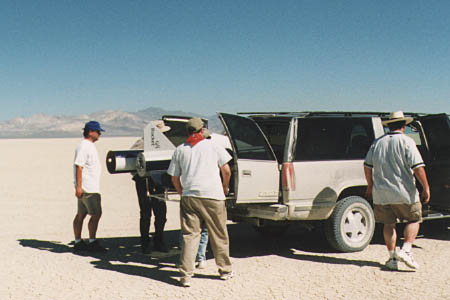 Yes, we are going to try it again. The Siebel people who came all seemed to have a good time and most are ready to go see the rocket launch when I do solve the problem of the launcher. The Big Kahuna finally did fly at Balls 009 the following year.