Dynacom kits are legendary for their strength and high level of design. These all-fiberglass and metal kits are the pinnacle of kit-built rocketry. Unfortunately, by the time I was ready to try them in the summary of 1998, Dynacom had temporarily stopped taking orders due to family medical problems. But by the end of the year, they had resumed business and I ordered two kits the Python and the Bull Pup.

The Bull Pup missile is a very popular subject and is often kitted and scratchbuilt. You can see that the Dynacom 5" Bull Pup kit comes closes to the AGM-12B missile and I painted it so. Unfortunately, I was in a hurry to get it ready for the June '99 ROC-stock so I didn't do too elaborate a job.

This rocket was finished just under the wire for ROC-stock (June 11-13, 1999). In fact, I didn't have time to take pictures of the completed rocket before leaving for ROC-stock, so the picture below was taken at my camp. 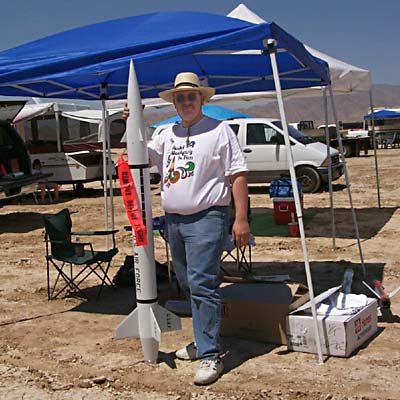 The first flight of the Bull Pup was on an L850. I wanted to use my 76mm motor casing and the L850 was the largest one for which the rocket was clearly stable.

The rocket zoomed right up with an impressive roar, but arced over as it flew and ended up toward the west side of the range at apogee. We saw the parachute, and I thought I knew where it came down, but we never did manage to recover the rocket. The perimeter of Lucerne Dry Lake is covered with sage and I was unable to find the rocket, even after a considerable time searching.

However, it was found by locals many months later and I was able to get it back after paying a ransom of $200. This makes the Bull Pup by far the most expensive kit I've flown, but at least I get to fly it again.

The second flight was at the AERO-PAC Black Rock launch on September 10, 2000. This time, I decided to load an L1120 into it, to really make it go. After all, an all-fiberglass Dynacom kit deserves the biggest motor that will fit!

My friends Rodney and Sam came out to the launch to see what this rocketry stuff was that I kept talking about. The trek out to the Black Rock desert was well worth it and they had a great time (at least that's what the told me). Above left you can see them posing with the Bull Pup and above right you can see the Bull Pup on the rail for the last time.

The flight started out perfect: a rapid straight ascent. Right at burnout, the rocket separated prematurely and stripped the parachute. Either the Adept deployed at motor burnout or, more likely, I had a drag separation. The drag separation is more likely because the nose cone was significantly weighted to gain stability with the Bull Pup forward fins and I didn't use shear pins. The Adept ALTS20 altimeter read 6702 feet so that was either the deployment or apogee altitude.

The rocket came down way too fast with the stripped 'chute acting as a streamer and landed hard. All four fins were cracked at the root (although they stayed on) and the nose cone tip was bent. Actually, it's not as bad as one would expect thanks to the Dynacom fiberglass, but this is the last flight of this rocket (at least without major repairs).

Of course, I had to wait several months to get it (good thing I had other projects in the works), but these rockets are definitely with the wait. There are no wood or plastic parts in the kit; just fiberglass and aircraft aluminum. The instructions are simple and straight-forward and kit construction should present no problems to the experienced high power kit builder.

All body parts are made out of wound G-10 fiberglass the the fins are G-10 sheet. The edges of the fins come pre-beveled and every part is precision fit. In a way, this kit builds too easily. I built up the airframe in only about 3 hours elapsed, which was a little too quick. The kit didn't even come with instructions, but after building the Python, it wasn't difficult to figure out.

The kit comes with no recovery system at all. There wasn't even a provision for an electronics bay. I ended up letting a 38mm tube into the nose cone to act as the bay so I could use an ALTS20 altimeter. I chose a Rocketman R9C as the parachute since the dry weight ended up at 12.55lbs.